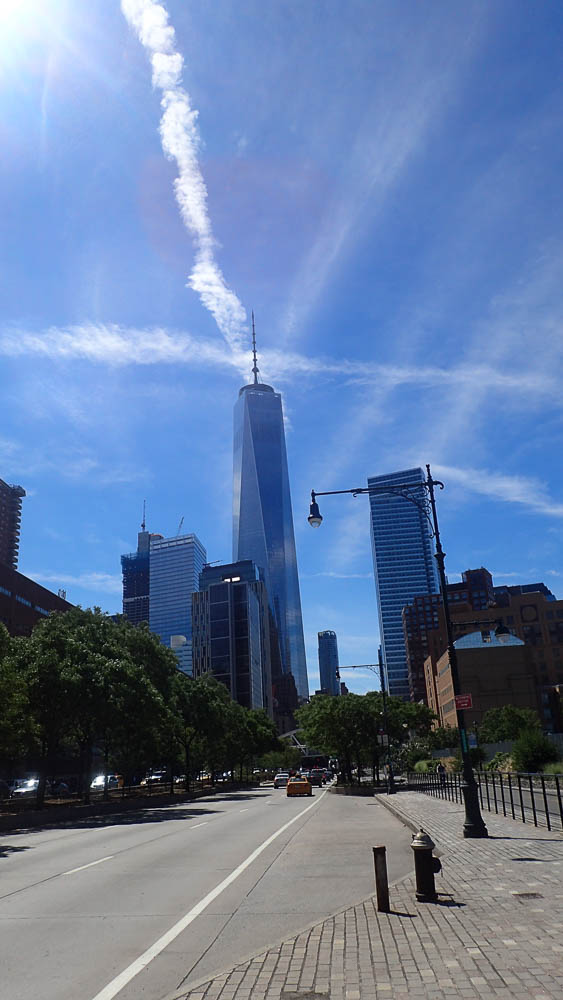 On the first day of our trip, we had tickets to One World Trade. It’s a massive building, and probably the tallest one that I had ever seen in person. After going through the TSA-like security line and body scanners, where an agent tried to get me to take off the belt that was sewn onto my shirt, we proceeded to the back of the line to go up into the elevators.

When they opened the curtains to let us see a glimpse of the skyline before getting onto another set of elevators, it was a rather pretty view. Once at the top, we entered a doughnut-shaped space where gaggles of other folks clamored to look out the windows. When you’re only 5’4″ like me, you have to squeeze your way through to see anything; Eric had no issues (this is where being 6’6″ comes in handy). Once the crowds dissipated and we had made a loop, Eric and I quickly realized something. Among all of the shininess and new (along with the Disney-eque gift shop) of One World Trade, there was absolutely no mention of what happened there 15 years before that shook this great nation to its very core.

I wasn’t expecting a “Remember 9/11” tribute or anything for this particular excursion, but among the presentations on what the city had to offer, there was no acknowledgment of the other two WTC buildings coming down. One World Trade was indeed beautiful, but almost too politically correct to be comfortable. It was like the building was trying to pull together this semblance of peace and harmony among everyone but if you watch the news, you know this isn’t reality.

One World Trade is an item to mark off the check list when visiting New York, but would we do it again on future trips? Probably not.